This site uses cookies for anonymised visitor analytics, and to disable this message upon acceptance. No personal or identifying data is collected.

Recent short films from around the globe. The best works are presented with prizes at the Award Ceremony on Sunday.

Recent short films from Switzerland. The best works are presented with prizes at the Award Ceremony on Sunday.

20:30
Swiss Competition I:
Was sein könnteTickets

With the Sparks programmes, we hope to spark a passion for the medium of short film. Featuring highlights from this year’s competition submissions, the selection offers an excellent introduction to the world of shorts, showcasing a diverse film culture beyond the usual mainstream and YouTube videos.

A presentation of films from Switzerland’s film schools, with live feedback and award show.

The eight curated programmes presented here are the result of a comprehensive audiovisual enquiry into the vast territory of the Andean nations: Argentina, Bolivia, Chile, Colombia, Ecuador, Peru, and Venezuela. Los Estados Andinos offers a panorama of the political, social, cultural, and artistic scene of these seven countries, exploring the idiosyncrasies and traditions of each as well as their collective identity and common grounds.

Commemorative practices, reflections on identity, family relationships, and borders in both the geographical and mental sense – these are four weighty and highly complex themes in a country like Israel. The shorts in the Country in Focus explore the past and present of this still young nation, illuminating the historic premises of its existence, the ubiquitous conflicts on multiple fronts, the militarization of everyday life, and family relationships within this context.

Kurdwin Ayub is one of Austrian cinema’s most interesting voices. Her distinct cinematic style has been recognizable from her earliest works through her most recent film, «Sonne», and it continues to evolve. In her works, she addresses gender roles, identity and migration, patriarchal structures, youth culture, and the fast pace of our time – always in an authentic and personal manner. Both playful and analytical, Ayub and her films resist pigeonholing.

Recent short films from Zurich, Switzerland, and around the world screened out of competition

Short film programmes on topics that our curators are passionate about – or that are simply fun.

Short film fun for young viewers aged 6+ and for the whole family.

Installations, performances, and exhibitions present the medium of film in unfamiliar forms.

Events that let you dive even deeper into the world of short film.

The Industry Events offer a platform for networking among film professionals, for discussing theoretical concepts, and for information and education about creative methods and aesthetic trends.

10:00
Creators' Room
Special Programmes
Death by Sports
11.11.2022, 22:30, Maxx 2
EN UTTickets
Sports can be challenging, scary, even dangerous – and yet, some people actually enjoy the physical activity. This programme attempts to illuminate the phenomenon of sports in all its facets. What is going on in the minds of people engaged in sports? Why do certain disciplines exist in the first place? Is it a good idea to train with your pet or in front of the TV? This is by no means an anti-sports programme but rather an homage to the absurdity of sports. 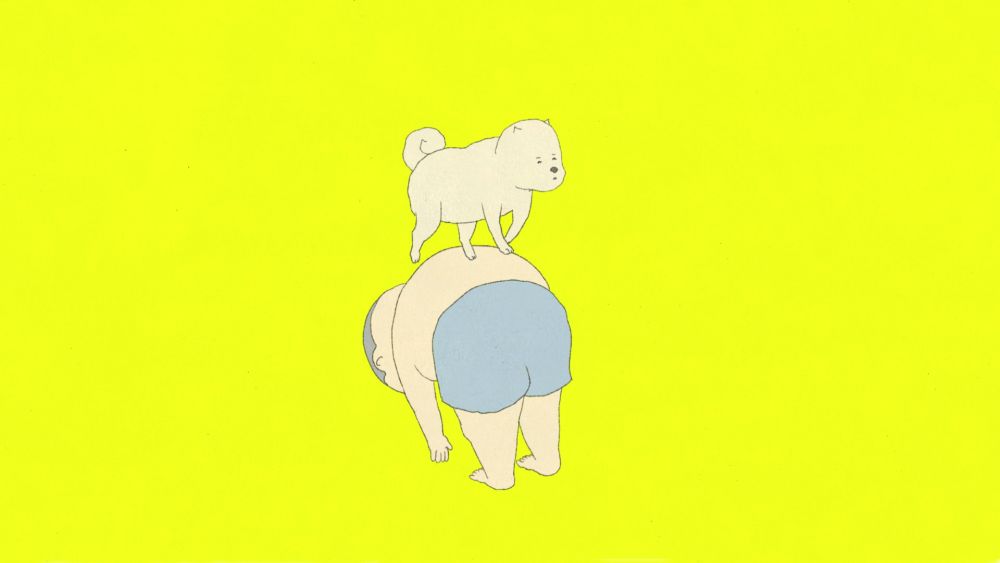 A boy is doing an exercise with his dog. 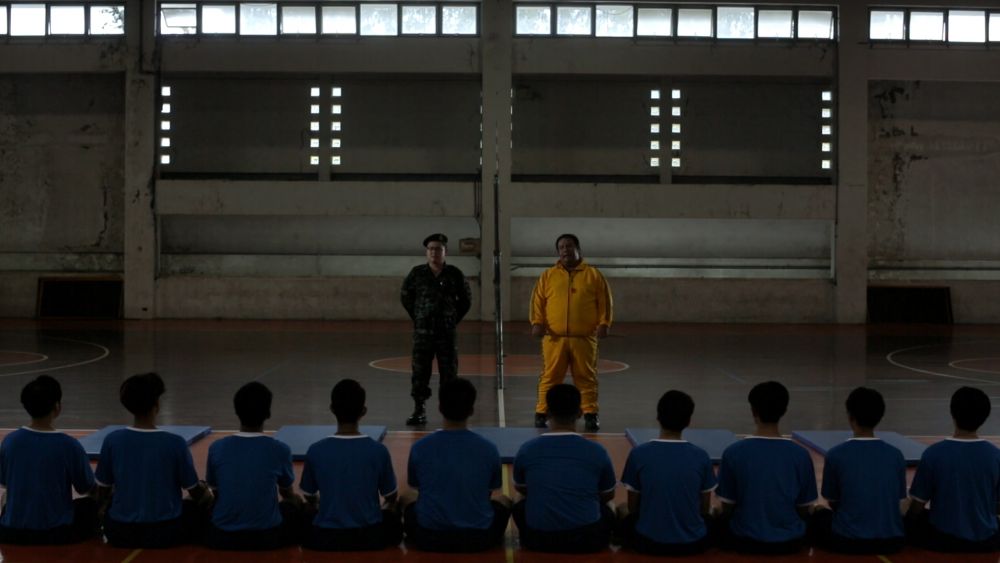 2015: Two fat Thai schoolboys don't want to serve in the military when they turn 21. They'd prefer to take the territorial defence course instead. But will they pass the physical test? 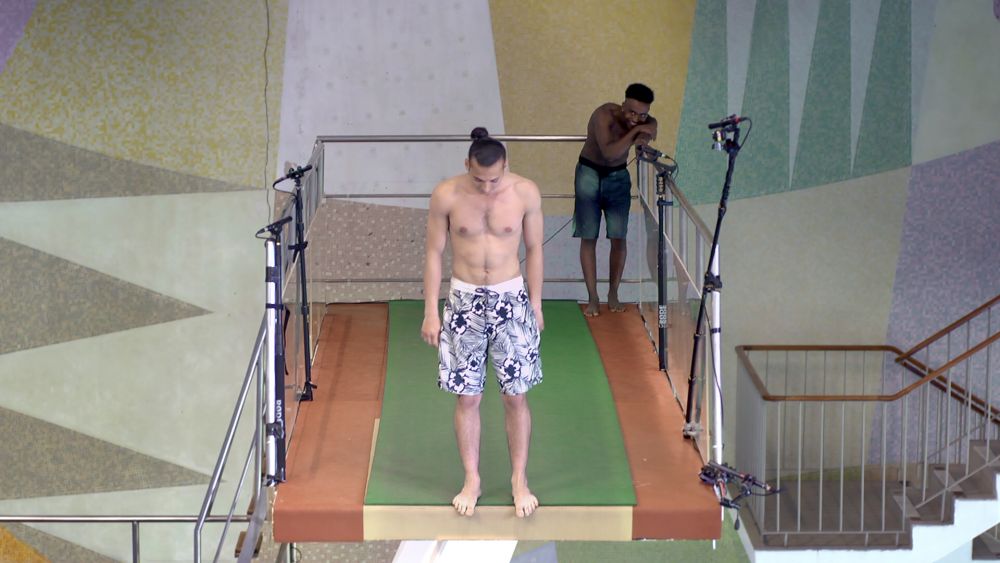 A 10-meter diving tower. People who have never been up there before have to chose whether to jump or climb down. The situation highlights a dilemma: to weigh the instinctive fear of taking the step against the humiliation of having to climb down. An entertaining study of humans in a vulnerable position. 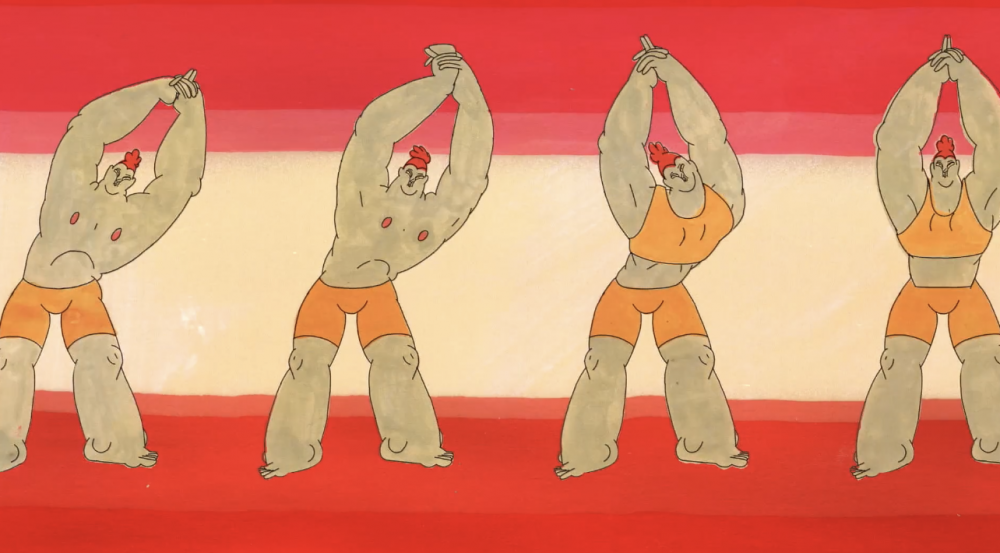 A woman goes to a yoga class and falls right out of her comfort zone. The large, featureless blue leader guides his yogis with almost metaphysical authority. Over time, the woman gets sucked into his world of blind obedience, joining the ranks of her yoga peers. Sometimes going to a yoga class can be more than you bargained for... 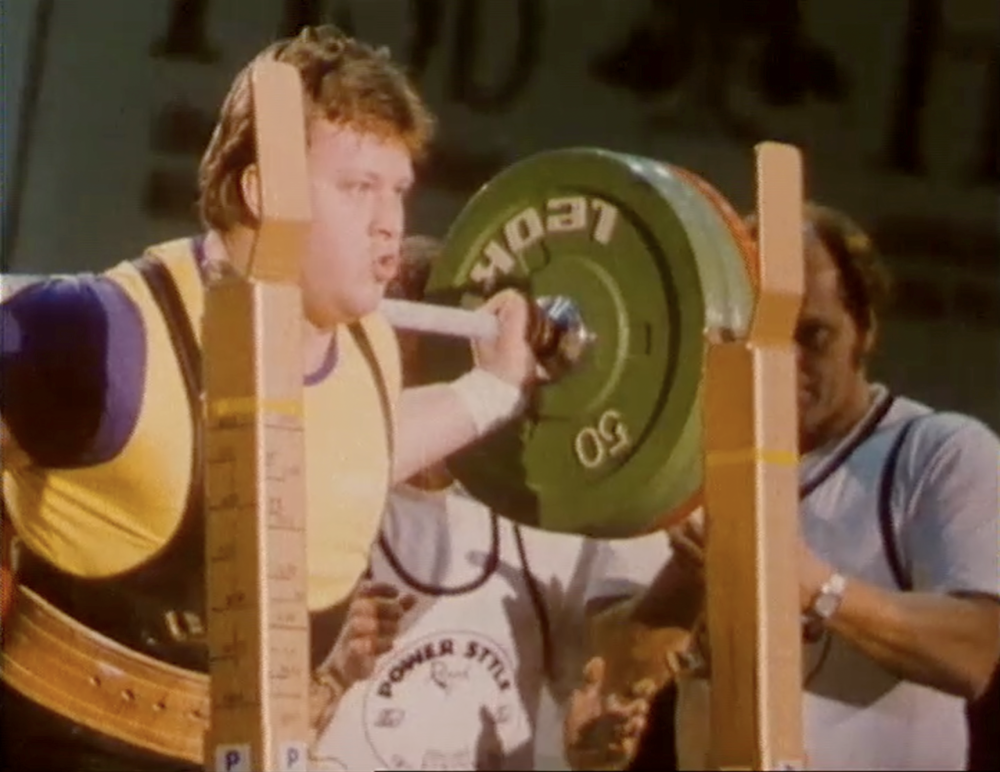 A satiric view of masculine power. 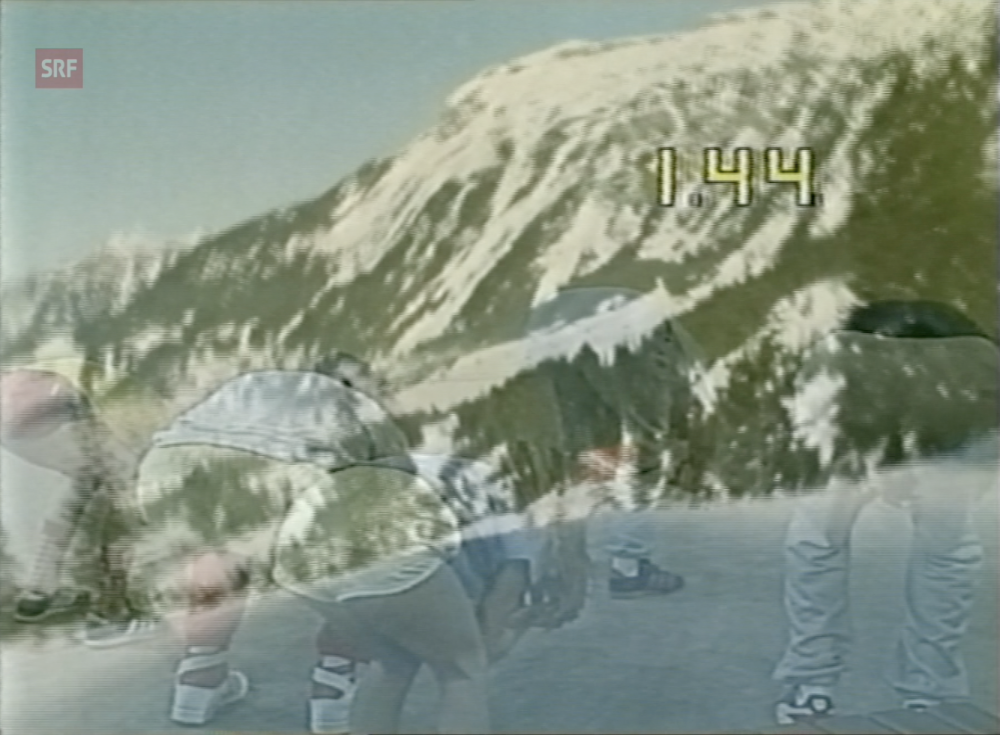 Ski legend Bernhard Russi shows kids in the studio how to approach the Lauberhorn downhill race. 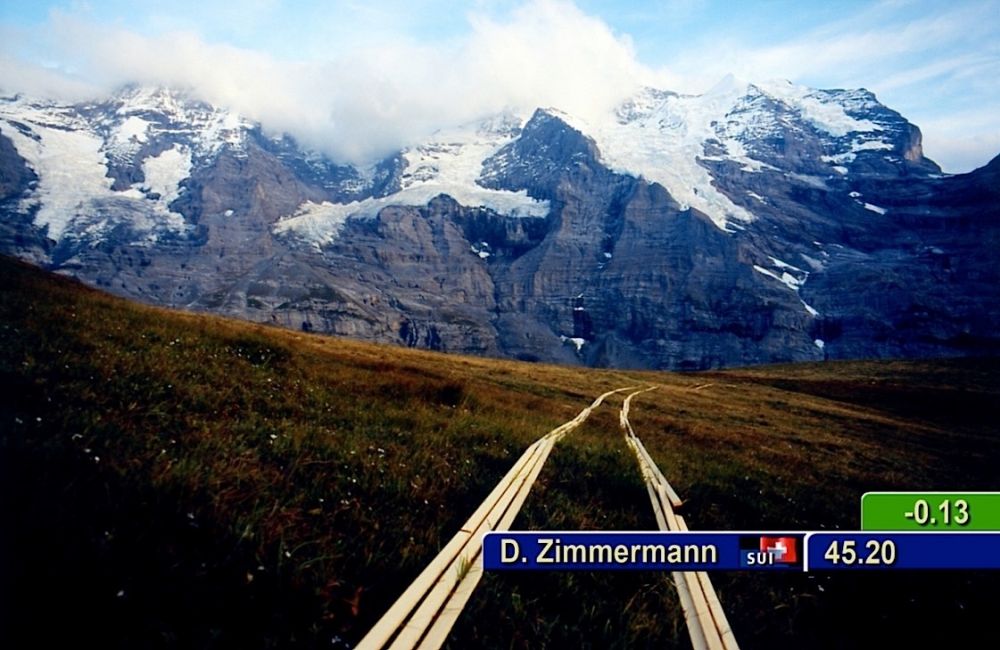 The Lauberhorn ski race, the worlds longest downhill race, has been moved to summer. 10,000 wooden slats show the perfect line that the skiers aim for but never achieve in winter. The viewers become racers, and the newscaster accompanies them live on their downhill ride at breakneck speed. 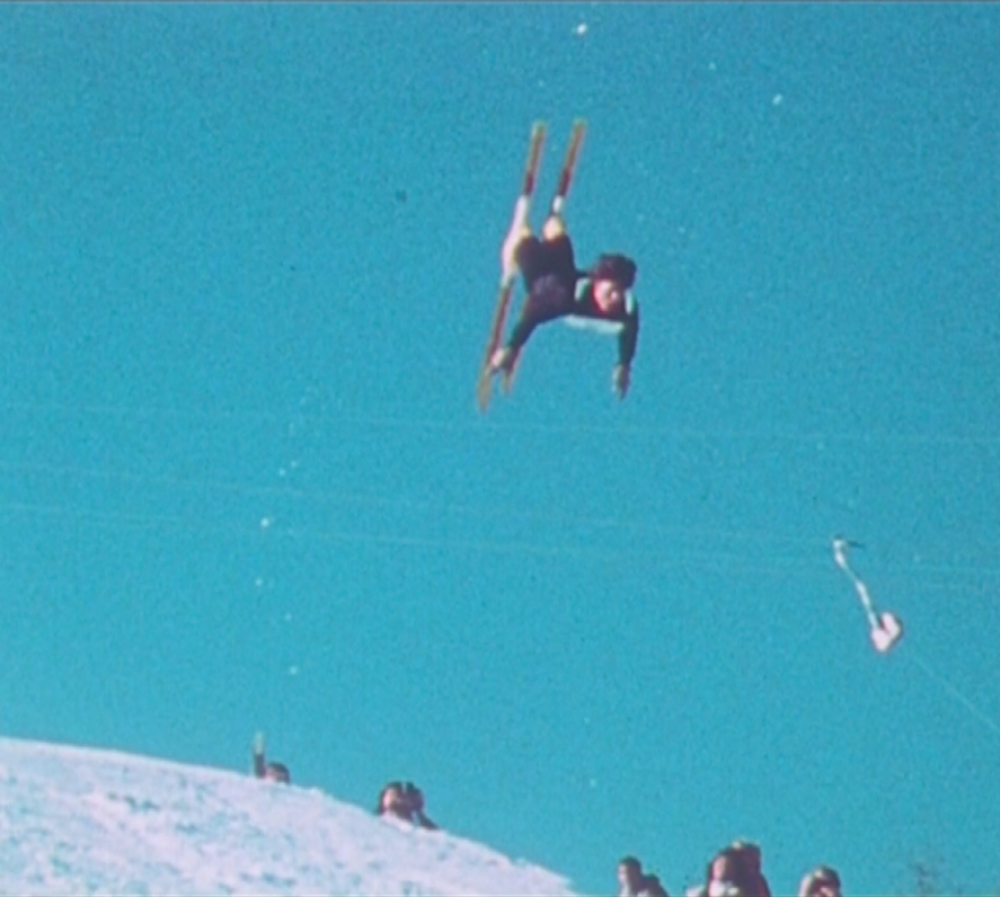 We're in the 1970s. Mr and Mrs Swiss are skiing. The winters are white, the is future rosy. Switzerland is celebrating its national sport and enjoying the post-war prosperity. People are carefree, fearless, and full of confidence. Vacations are spent at home, the domestic ski industry is flourishing, and the ski resorts are far from being dependent on foreign money.

A film about spiritual exercise on a one-mile paved loop in a park. The Six Day Run has been one of the most extreme individual endurance sports since the 1870s. 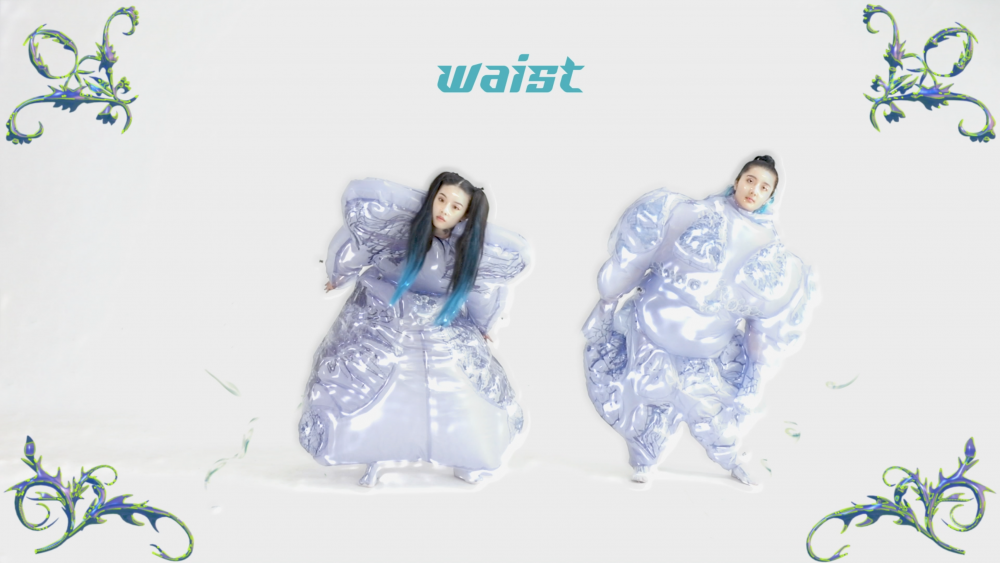 A short film is not just a shorter film. Shorts are a distinct art form, which we showcase at our annual festival.

Short films come in all shapes and genres, and how long – or short – they are, varies quite a bit. Simpler production processes allow filmmakers to capture the zeitgeist and quickly respond to trends. Shorts can be entertaining or surprising, they can analyse society, take a political stance, or offer glimpses of worlds unknown to us.

We compile our short films into thematic programmes or specific sections, such as our competitions, paying close attention to the selection and sequence of films in each programme. All you need to enjoy short films is an open mind for new discoveries and surprises.

Kurzfilmtage offers discoveries for everyone: our thoughtfully compiled thematic programmes address current events or topics that our curators are passionate about. The competition programmes showcase the latest filmmaking from around the globe, while installations, performances, and other specials highlight the diversity of audiovisual forms. And a programme of special events including concerts, readings, and more enhance the festival experience.